My main guest for this convention was Dina Meyer from Starship Troopers & Saw. I’ve been a fan of hers for years & watched many awesome & terrible movies purely because she was in them so this was very exciting for me that i’d actually get to meet her.

I tried to sleep from about 9.30pm the night before to be up early but struggled with the excitement. I think it took me about 2 hours to get to sleep, i don’t know, i didn’t look at the time, all i know is i was lying in bed for a very long time. I know i woke up at 3.30am the next morning, i tried to get back to sleep but failed, i had set my alarm for 5am.

So when 4am came & i wasn’t getting anymore sleep I got up. I left my house about 5 to try & get an earlier train but missed it by about 30 seconds 😦 then had to wait an hour to get the train i had originally planned to get.

I got to Earls Court about 7.30, the queue was long but that didn’t bother me really as i wasn’t there for any of the big names like Carrie Fisher or Stan Lee. I was about 1/2 way up the side of Earls Court. By 8am the queue was getting bigger & going round the back. A guy said to me “i wish i’d got here earlier”, i said to him that it could be worse we could be arriving now. Someone in front of me laughed & said “that’s the spirit”.

When it was about 8.45 (doors opened at 9) some of the guests started arriving next to where i was stood. I saw Anthony Head arrive in a taxi having a laugh with the taxi driver, George A Romero passed in a car but stopped a little further up, TJ Thyne got out of a car & said “hi guys”, Michael Madsen rushed out of his car & into Earls Court not making eye contact with anyone, then a big coach arrived. I struggled to see who was getting out, i recognised a few from pictures on the London Film & Comic Con website but no one i was tremendously interested in – from Twitter it looks like Dina Meyer, Casper Van Dien & Robert Hays was on that bus but i didn’t see them when it pulled up.

At 9am the doors opened, i got in smoothly & immediately went to get virtual queuing tickets. Lena Headey first (as i knew she would be popular), then Dina Meyer followed by anyone else i wanted to meet.

First photo I got was on The Iron Throne from Game of Thrones.

Anthony Head had been added a few days before & they hadn’t sorted a VT system for him. I asked about it & they said just join the queue. I thought if it’s just join the queue for him then i’m best off joining it now before the standard entry people get in at 11, so i did. When i finally got to Anthony Head i told him i loved Repo & he quoted a line from the film to me but i completely forgot what it was.

My first photo shoot was with Lena Headey from Game of Thrones, although i’m not a fan for that, to be honest i started watching GOT because she was in it.
The photo shoot ran smoothly, i really wanted a hugging photo with her so when it got to me i asked her for one. She said “yes yes” in quite an enthusiastic way & i got my hugging photo, it’s my 2nd favourite photo of the weekend.

From then onwards it seemed like i was running from one photo shoot to another. It was so crowded so it was a huge effort. I then ran over to my next shoor that was with Michael Madsen.

Followed by a shoot with Robert Knepper from Prison Break.

After my soot with Robert I took the opportunity to meet my main guest, Dina Meyer. I joined her queue & waited. It was moving really slowly but as she got to me I realised it’s because she was really taking the time with people. When she got to me I told her she was the main reason I was there. She started asking me where i was from, how long it had taken me to get there & then thanked me for the journey. She then asked me if i was on Twitter & that she doesn’t often ask people that but she recognised my name. Needless to say i was very happy haha 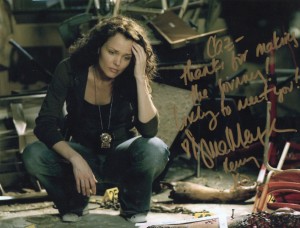 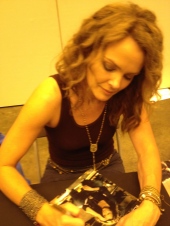 After Dina i went over to Lena Headey to meet her. I paid half way down the queue & asked a crew member if Lena was doing personalising, the crew member said she was but no one wrote down my name like what normally happens with busy guests. So when i got to Lena she signed the photo i had chosen & i said “would it be ok to personalise it?” she said “yes…go” so i said “Caz, C…A…Z”, she said “C..A..Z?” but then still spelt it with a K, i didn’t really mind cause i got to meet Lena Headey haha 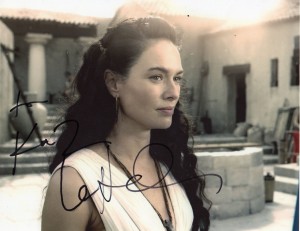 Afterwards i tried to take a bit of a break but the busyness was mental, it was hard to get outside but i managed to go outside & have a quick cigarette.

Then I had a 20 minute window till my next photo session so i though i’d get Jason Mewes autograph. Just as it got to me he decided to go to the toilet. I waited for a while, then he came back & said “it took me longer to walk back than to take a piss, i should have got my dick out & waved it around” haha, he even did the hand actions.

My first photo session of the Afternoon was with Juliet Landau from Buffy. A girl apparently queue jumped & another woman completely went off on one. I can understand queue jumping is annoying but what made me laugh was that this woman kept shouting “look she’s queue jumped again”, the girl hadn’t, the queue was moving so obviously the girl was in a different place. The Juliet Landau photo shoot was pretty quick, a guy a few people in front of me tried to have a conversation with her but was fairly quickly moved a long.

Straight after was my Summer Glau shoot, i have met her before, many years ago, but my photo with her back then is horrible as i was going through a major dizzy attack so i’m all pale & trying to force a smile. I was so pleased i could get an updated photo & it’s a much better one. The shoot was very fast, she was very popular so it was pretty much a “hi” click “bye”

I saw a few guests who didn’t have a queue as i was sick of queueing. I met Robert Hays from Airplane. I then went to meet Wendy Glenn from “You’re Next”, she spelt my name with a K as well but i said it didn’t matter & she grabbed another photo & said “no i have to get it right”. Both of them were awesome. 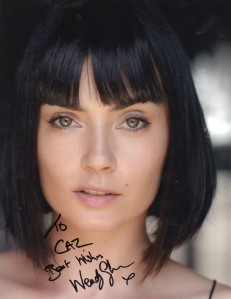 I then quickly went outside to see my friend who i don’t often see before my next shoot with Casper Van Dien. Had a brief 5 or 1o minutes with my friend then ran back inside only to find the shoot had been pushed back to 5. So i waited, i saw another friend who was getting a photo with Casper also He was before me in the queue & when he came out he said  “casper is having very interesting pictures with people”, when i got closer to the front Casper seemed to be having funny photo’s with all the men. I’m rubbish with pose requests anyway so i just had a nice photo with him..

I then had a duo photo with Dina Meyer & Casper Van Dien. My photo with them is probably my favourite of the weekend with my photo with Lena coming a close second. 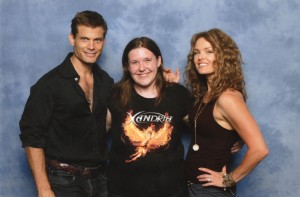 Straight after that was the Dina shoots, it was getting quite late at this point & one of the crew members said they might have to stop the shoots. I was getting quite panicky as my shoot with Dina was the one i was most looking forward to & i wasn’t planning to come the next day but luckily i got through. I asked her for a hugging picture.

Not impressed with how i look in this but she looks great..as always 🙂

I woke up Sunday feeling quite depressed. i’d bought my entry ticket & Dina photo ticket back in December, it had come around so fast & now it was over. My friend was trying to meet Stan Lee so text me to say he was queuing. So when i woke up i decided to go back to see my friend & meet Dina again.

I got there about 11 & joined the standard entry queue. I got in by 11.30 & headed straight for Dina’s table, she had an open queue so it completely unprepared me. I considered coming back later but then though what if they start giving out VT’s and don’t get the chance so i joined the queue.

She got to me & i got her to sign the pic of us together from the day before. She said “aww we don’t look too shiny” resulting in a conversation about having photo’s with sweaty people. She also asked me if i was on twitter again as i’d tweeted her that morning & she had favourited it so she recognised my name. Some guy joined in on our conversation which i was a little annoyed about as he was a talk & was next in line anyway so would get to talk to her then. 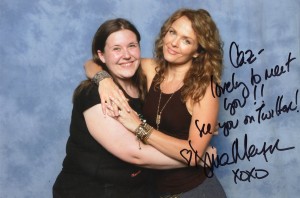 To be honest, it’s been a long time since i’ve been to a con another day for someone. Dina Meyer was awesome. 🙂
Robert Knepper had a very short queue so i went to get his autograph. His crew member wrote my name down & robert was like “how do you pronounce that?” i told him & he shook my hand & said “hi caz” – 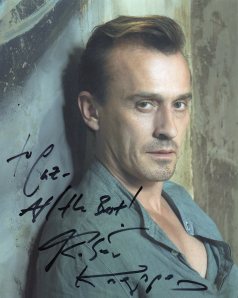 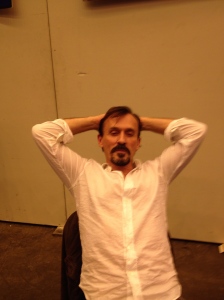 I also bought another photo session for Dina & just before the shoot was due to start i went over to Lena Headey’s queue & asked if any more VT’s were being given out, i was told no but to come back later but then a guy came up to me & said he had to go so i could have his VT. Thanks to that guy, whoever you are 🙂

Then i joined Dina’s photo shoot queue. It was pretty cramped.
So it get to me & Dina says “Hi, how are you? i saw you earlier, we did signings & things, what do you want to do?” i really didn’t know what to say, i  was a bit taken back she remembered me & i’m rubbish thinking up poses so i just said “hug” lol. I’d had a hugging picture the day before so would have liked something else but didn’t know what. 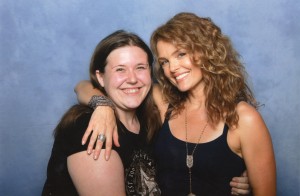 Afterwards i went to Lena’s queue, i got her to sign my picture with her. I told her “I’ve been a fan since Gossip”, she said “wow that’s a long time, a very long time” then started saying about people bringing her really old things to sign & how weird it was.

I went home after this, the most amazing weekend. Thanks to all involved, i’ll never forget it. 🙂

This entry was posted in Uncategorized. Bookmark the permalink.